His Eminence Yongdzin Lopon Tenzin Namdak Rinpoche, the holder of the three Doctrines of Bön, Sutra, Tantra and Dzogchen, established the Triten Norbutse Monastery in 1987 in Kathmandu, Nepal, to replace the original monastery that was destroyed in the 1960’s in Tibet. Since the establishment of the Monastery until today His Eminence has kindly given teachings and transmitted his profound knowledge of Bön to monks coming from Tibet and the Himalayan area as well as to numerous students, scholars and practitioners.

The newly established Triten Norbutse Monastery provides full Bönpo study programs in two schools, Dialectic School and Meditation School. The studies in the Dialectic School lead to a Geshe degree. In general it takes 13 to 18 years to complete the Geshe studies. Excellent Geshes and many great Dzogchen practitioners have graduated from this Monastery. Graduated Geshes and meditators benefit greatly sentient beings and the Doctrine by their continuous practice, and teachings and by preserving the original culture and tradition.

This year the 10th Geshe Ceremony started on the 10th day of the second month in 2019 in the presence of the Great Abbot Lungtok Tenpa Yungdrung Rinpoche, the Head Teacher Lopon Tsangpa Tenzin Rinpoche, the Meditation Khenpo Drudrai Khanpo Tsultrim Tenzin Rinpoche, the Abbot of the Dialectic School Kalzang Monlam Rinpoche, and the Lopon of the Dialectic School Lodro Tsukhpud Rinpoche. Many Geshes, monks and guests were also present in the Ceremony. Altogether fifteen Geshes were graduating in this occasion.

The concluding Auspicious Ceremony started on the 20th of February. At 9 am the Great Abbot Lungtok Tenpa Yungdrung Rinpoche, Lopon Tsangpa Tenzin Rinpoche and other high Lamas, and the new Geshes proceeded with the incense and blowing short Tibetan trumpets to the main temple. After that all monks and guests gathered in the temple.  The former head of the Supreme Tibetan exile Court and the member of the Tibetan exile Parliament Jadur Sonam Zangpo, and the representatives of the Ministry of Culture and the Bön tradition in the Tibetan exile Government in Dharamsala, Geshe Monlam Tharchin and Tsewang Tashi Bara participated the Ceremony.

Also many people from Tibet, the Himalayan region and Nepal participated the Ceremony in the main temple. Monks chanted special prayers and offered Tibetan butter tea with Tibetan dresil to all. After that the new Geshes started the extensive Auspicious Ceremony.

In the afternoon everybody was offered lunch. At 1:30 am His Eminence Yongdzin Rinpoche was invited in the main temple. While sitting on the throne all monks and guests gathered there. The monks recited prayers and offered again tea to everybody. Then the Lopon, the head teacher of the Monastery, named the new comers as Geshe with a prayer and His Eminence Yongdzin Rinpoche gave the diplomas to the new Geshes. The representatives of the Tibetan exile Ministry of Culture offered Khatas and congratulations to all new Geshes.

The new Geshes stood up and chanted the auspicious prayer and threw in the air flowers, rice, barley, wheat, candies and coins as an offering. After that Rinpoche gave speech and advised the new Geshes. Then the ritual of purification was performed in front of the main temple to monks and all guests. Prayers were recited to liberate obstacles and negativities in the world. 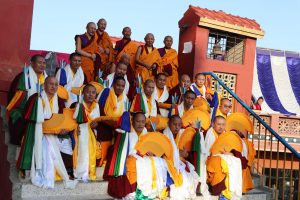